Cinnamon Sugar Root Beer Bread is a subtly sweet quick bread made with your favorite root and topped with delicious cinnamon sugar. 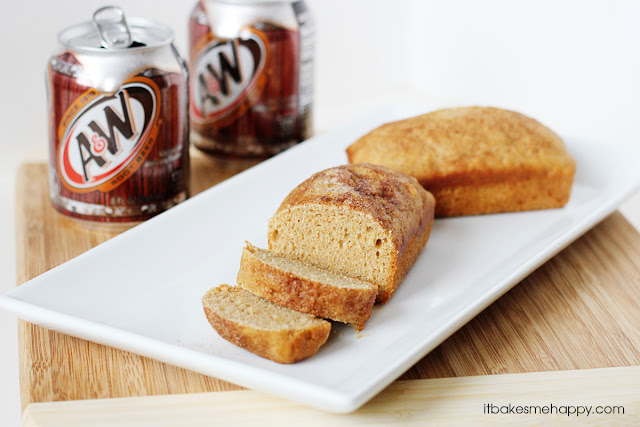 This month’s GYCO secret ingredient was a doozy for me. Not only do we not drink, but on top of that I’m 7.5 months pregnant so buying beer was not something I was even willing to do. Let me just say… I do like a good beer bread myself, but I don’t need the cashier or people standing in line behind me judging me for buying a can/bottle of beer while pregnant and toting my 22 month old. So what to do? What to make, why bread of course and why not try root beer as my alternative?
I read quite a few “beer bread” recipes online just as a refresher, so I would have something to go off of and I decided to adapt this Honey Beer Bread recipe by Ali of Gimme Some Oven. While in the adaptation process I thought I’d go all out and top it off with some cinnamon sugar to play up the sweet root beer notes. I love the sweet, subtle flavor of the resulting bread and because I used my mini loaf pan it baked up in less than 30 minutes. This Cinnamon Sugar Root Beer Bread makes a great snack or breakfast; I’m excited to make French Toast with my leftover bread – enjoy and happy baking!

Interested in GYCO? Check out the rest of the entries here

This site uses Akismet to reduce spam. Learn how your comment data is processed.

Hi I'm Emily the girl behind It Bakes Me Happy. I have a serious sweet tooth and an ever growing love of spending time in the kitchen. Read More…